Lesson 01: What is Bourbon?

This is the first of (hopefully) many “Bourbon 101” posts, where I will try to answer different questions, under the “American Whiskey” umbrella. And why not kick if off with one of the most fundamental questions: 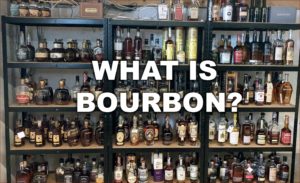 Bourbon is one of approximately 35 different types of American whiskeys that are officially recognized by the Alcohol and Tobacco Tax and Trade Bureau (TTB). It is also – by miles – the type of whiskey that is most popular and thus produced in the largest quantities.

To be able to call your product Bourbon, you must adhere to a number of very strict rules, that are almost all made to ensure high quality. The rules are:

Phew, that was quite a mouthful.

But did I not forget something? What about age requirements? Just like whiskey has to be at least three years old when sold in Europe, surely there must be some requirements for Bourbon??

Nope – there are no ageing requirements for Bourbon! That means that if the distillate has spent one second in a new charred oak container (and adhered to the other rules), you can call it a Bourbon.

Two exceptions to this rule: If you use the word “Straight” on the label, it must be agreed for at least two years – and if you use the term “Bottled-in-bond”, minimum four years are required. But more about those terms in future lessons

Oh, and one final thing: If you blend Bourbons of different ages in the product you sell to the consumers (which is absolutely allowed) – and you display the age on the bottle, you can only show the age of the youngest whiskey. Even if 99.99% of the whiskey is 23 years old and 0.01% is two years old – you will have to call your whiskey a two year old product. This protects the consumer from the lack of transparency that is going on in e.g. the rum industry, where a 20 year rum product may only contain a modest amount of 20 year old rum.